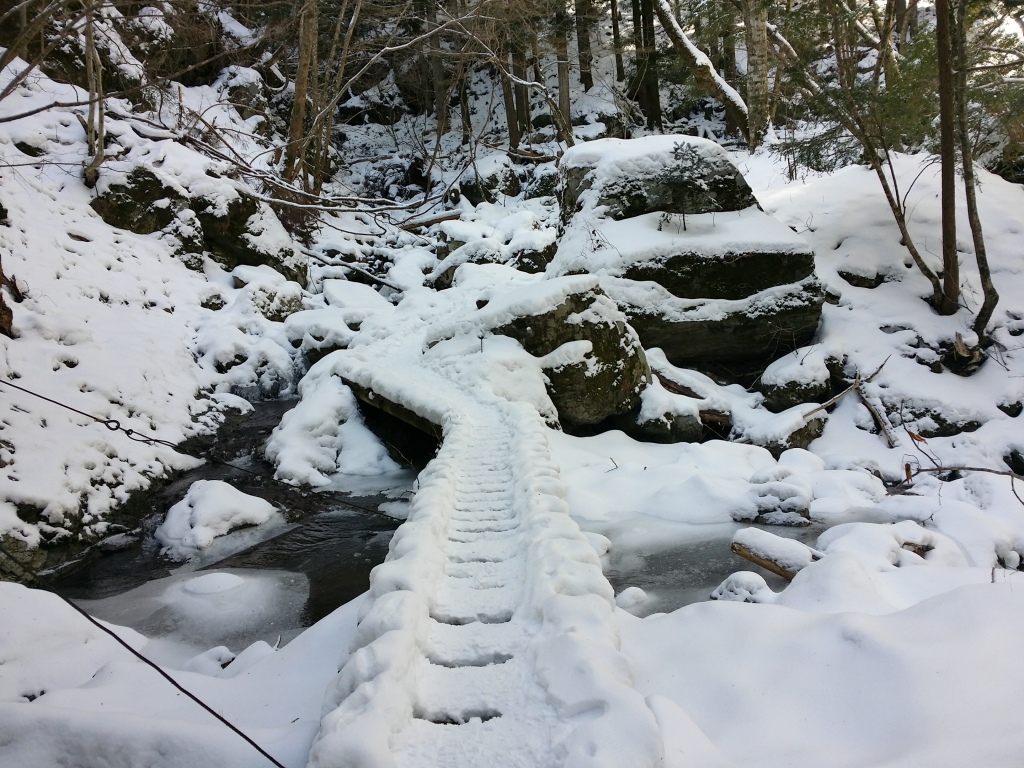 A couple weeks ago, I was asked by a fellow JET if I had any interest in going out to see a frozen waterfall. Personally, I’ve never heard of such a feat, so naturally, I was quite interested. To my surprise, however, she told me that the frozen waterfall could be found in my village, and I was even more ecstatic than ever. Most recently, the days have been warming up, and on the morning we had decided to go it was actually going to be the warmest day of the year, so I asked her not to be disappointed should we get up there and the waterfall be a standard, run-of-the-mill waterfall, as opposed to the frozen kind we wanted to see.

Although the nights often dip below freezing temperatures, it was supposed to hit about 15 degrees Celsius the day we left. We opted to leave early in the morning to ensure the highest chance of the waterfall still being frozen, so I picked her up from the closest train station possible (which is about a 40 minute drive away from our destination). I had asked my co-workers about where the general location is/was, and was fortunate enough to find the place without a major hitch. We parked my car in a general parking area (which had a 500円 fee) and proceeded to make our way to the falls.

My co-worker told me that it wasn’t a very long hike from the parking area to the waterfall, but to be completely honest – I wasn’t expecting such a gradient and incline on the way up the mountain. As we traversed our way, the further along we got, the more snow and icicles we began to see. At one point, most of the road we were walking on was completely covered in snow. Despite not seeing a hint of cold, snow, or ice on the road, or on the hillsides we drive by to get to the trail, I was taken back by how awesome it was to still see snow on the ground. 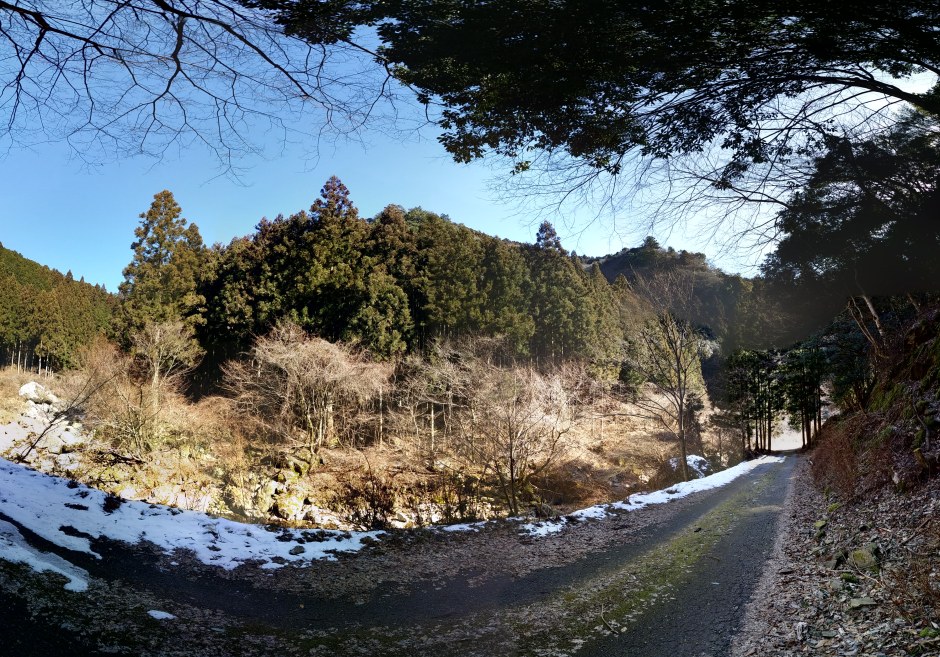 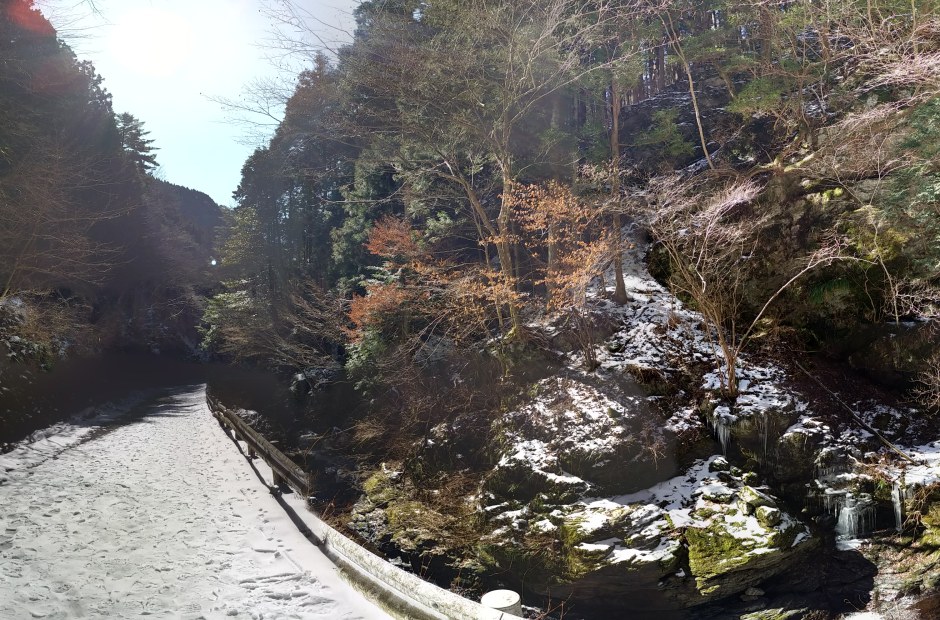 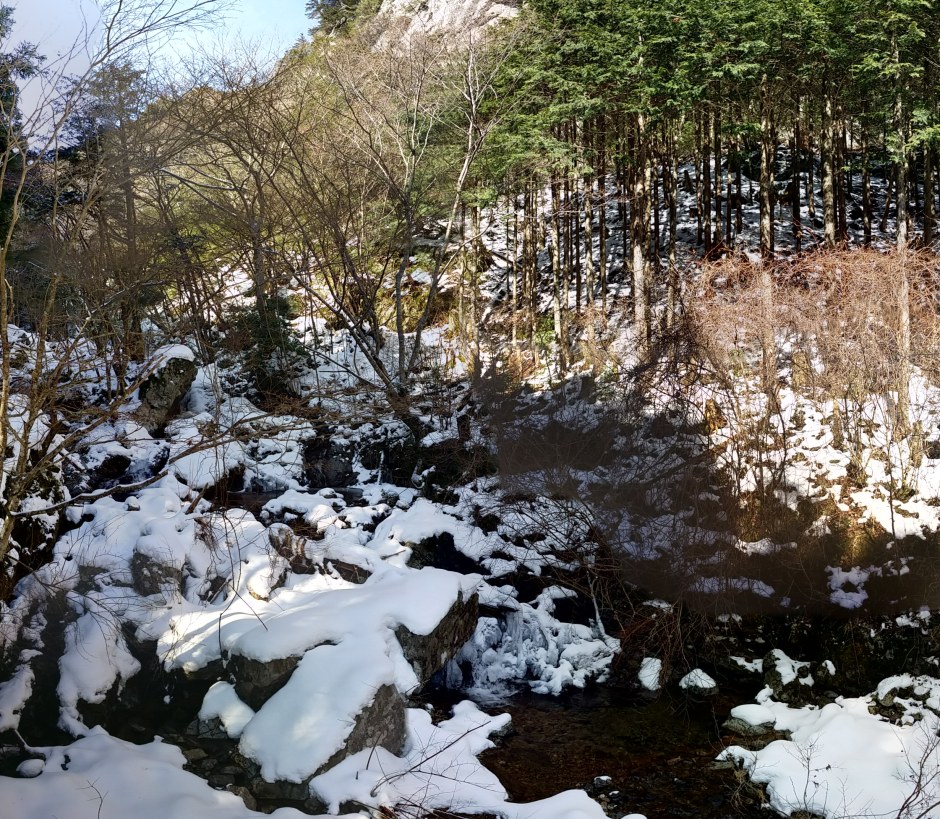 Somehow, we managed to keep our balance all the way to the end. As we got closer, there was an area right before we got to the falls that felt almost other-worldly. The ground was covered in snow, and light peeked through the trees ever-so gradually, to display a snow-laden path, with a bridge and a slightly frozen (but still flowing) stream, underneath it. We used every bit of caution crossing this bridge as there were no railings and one slip could end our adventure and require us to make our way to somewhere warm before hypothermia or anything worse would set in. Granted it wasn’t “that cold,” but being cold and wet in an area blanketed in snow would not make for a very fun time.

At any rate, once we made it to the waterfall, we were surprised to see it mostly frozen, while also trickling down water. There were several times when large chunks would slide off and make a huge crashing sound; not to mention there would be times I would see chunks of ice jumping from side to side as they would make their way down from the top of the waterfall. It was truly a sight to see and behold. Although I would have loved to see the whole waterfall frozen, I really liked seeing it in its current state of being half frozen and flowing at the same time.

Overall, I think the trip was well-worth it. My village apparently has no shortage of waterfalls, and the simple fact that my village is roughly the same size as Osaka City (with trees outnumbering people, at 5,000:1 odds) tells me that I have so much more of this little/big place to explore.