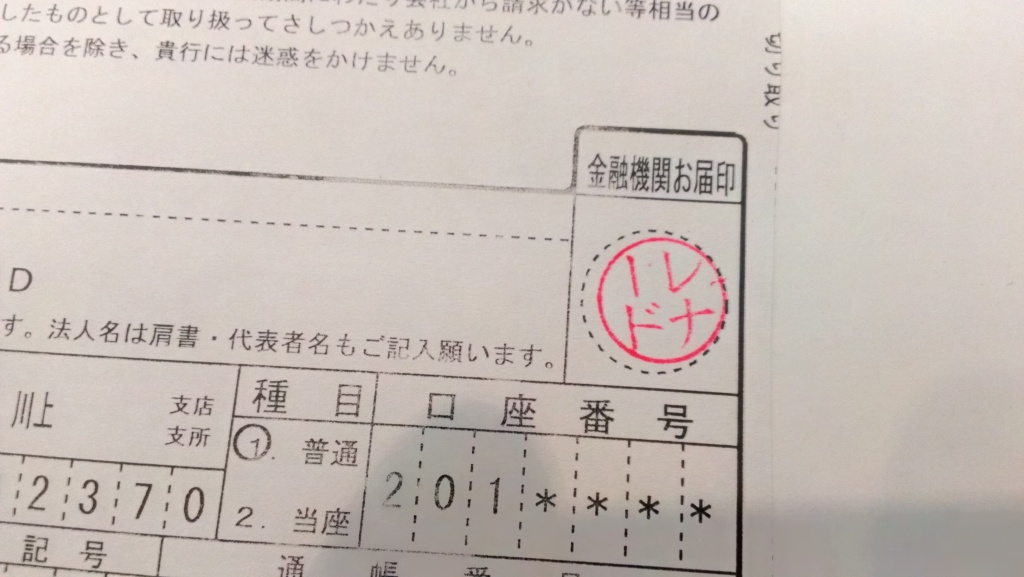 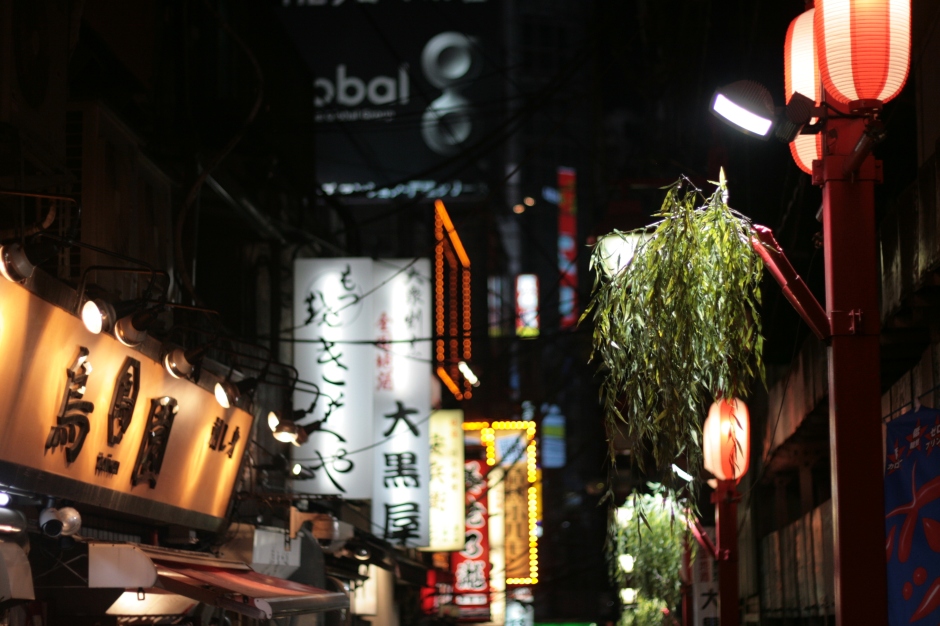 「住めば都」”You can get used to living anywhere.” – Japanese Proverb

When I first heard this question, I thought that the teacher had asked me: “少しなりましたか” which literally translates into: “Have you become a little bit?” (Yeah, I was confused.) It wasn’t until later, that I came to learn that he was asking me whether I’ve grown used to and/or accustomed to life in Japan, (even a little bit) yet. I’m still not sure what an adequate answer to this question would be, so I often mention how hot and humid Japan tends to get and how that still may take some time for me to get used to (despite, in reality, how much I enjoy it).

The time I’ve spent here in Japan has seriously flown by as I find it difficult to believe that it has almost been an entire month since I arrived in Tokyo. I kind of wish I took more pictures of the venue so that I might be able to share the extravagancy of it all, unfortunately, my interests lied elsewhere. Not only that, but the majority of the pictures I took while in the hotel were via my cell phone (in terrible quality) and one photo on my camera which turned out blurry due to my camera settings shifting to manual focus rather than auto focus). Besides that I found myself more intrigued by the various things Shinjuku had to offer! 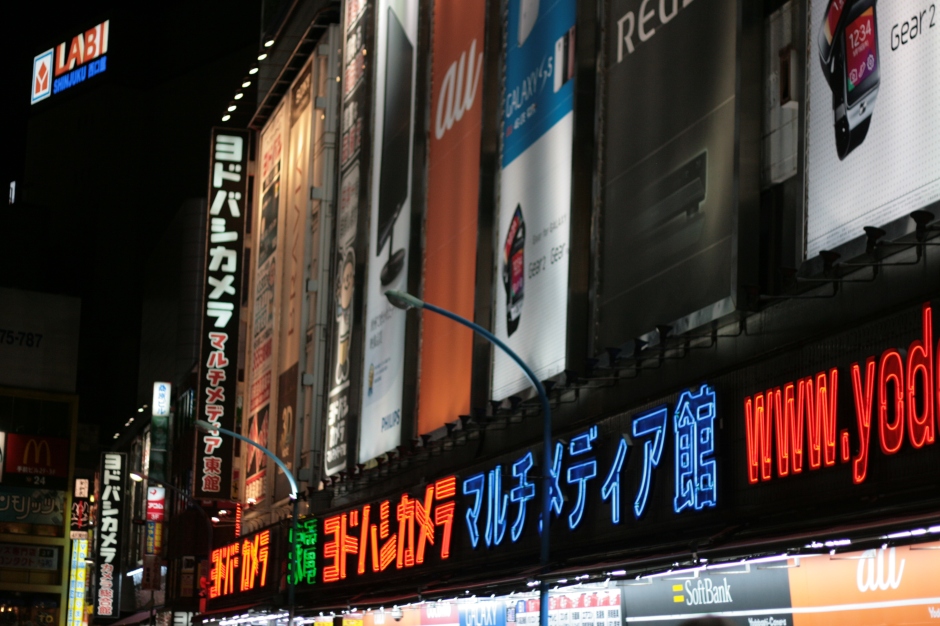 Like I mentioned earlier, life in Tokyo was fairly short, so I didn’t take as many pictures with my DSLR as I did with my old cell phone. At any rate, after arriving in Tokyo on Sunday evening, my group left for our designated homes in Nara early on Wednesday morning via bullet train. Once we had arrived, we had another orientation before our supervisors came to pick us up for the end of the day. Shortly thereafter, I was taken to my new home in Kawakami-village in Nara. An interesting fact about my village is that it’s the same size as Osaka-city, but is made up of 96% forest and has fewer than 2,000 inhabitants (including yours truly) living in it. This will definitely give me a great opportunity to be a cultural ambassador within my community; especially since the Emperor of Japan is said to be making an appearance here, sometime in November! 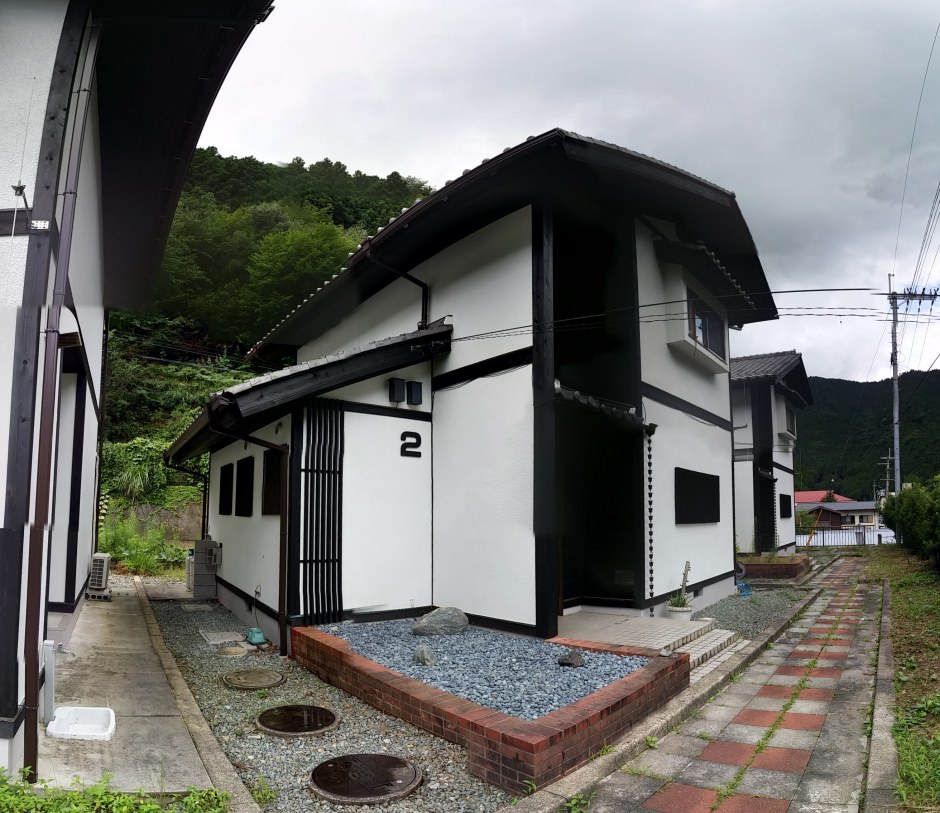 Despite being freaked out by a gigantic spider, the size of my hand, in my shower-room (which my manager was unable to find and kill after showing me), I locked my shower up and didn’t use it my first full day in the house. Later, I managed to gather enough courage to hunt the spider down (its eyes reflected light like a cat or a dog in the dark) and freed my house from its terrifying grasp. Granted, even today, I double check every corner of the bathroom before stepping a foot into it. So far I’ve found a variety of spiders all around my house, but I’m thankful that none of them are as big as the one I have dubbed, “Spid-zilla”. May he rest in pieces.

Interestingly, however, I also managed to find a gecko upstairs, the same night I found the spider. I was tempted to try to catch it and throw it into my bathroom so that it could consume the spider that was hiding in there. I honestly thought that the spider would probably eat the gecko, but my manager reassured me that the gecko I photographed would devour any spider in my house regardless of their size. I think he only said that to put my mind at ease, but sadly I didn’t see the gecko again after my first night. 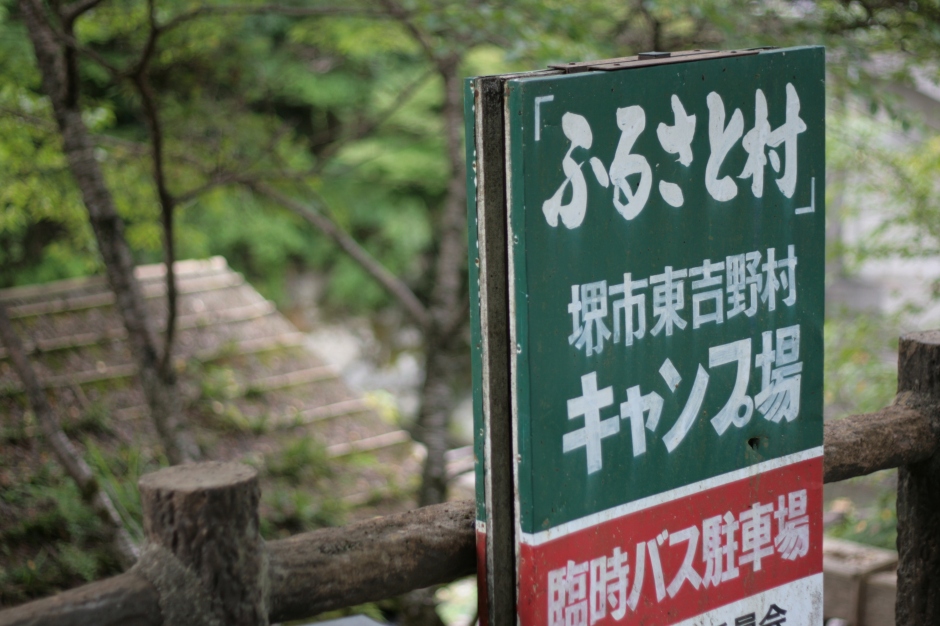 Through observation, it reminded me a lot of a type of outdoor school as I saw the kids chop wood, build a fire, cook lunch, catch fish, as well as go swimming in a nearby crystal-clear stream.

There were a handful of fellow teachers there supervising the kids, whilst the camp staff instructed them on what they needed to do, and how to do it all properly. These instructions obviously ranged from how to build a fire to how to catch fish.

For lunch, I was pleasantly surprised by how well, and how quickly the kids were able to build the fires, as well as how the groups were separated in a manner that some kids had the task of chopping up the vegetables, while others cleaned the pots and pans – ensuring maximum efficiency. For those of you that are curious – the kids made curry for lunch that day. (Also as a heads up: In Japan, posting pictures of our students online is strictly prohibited without parental approval, so as much as I’d like to introduce you to some of them through pictures – I can’t.) 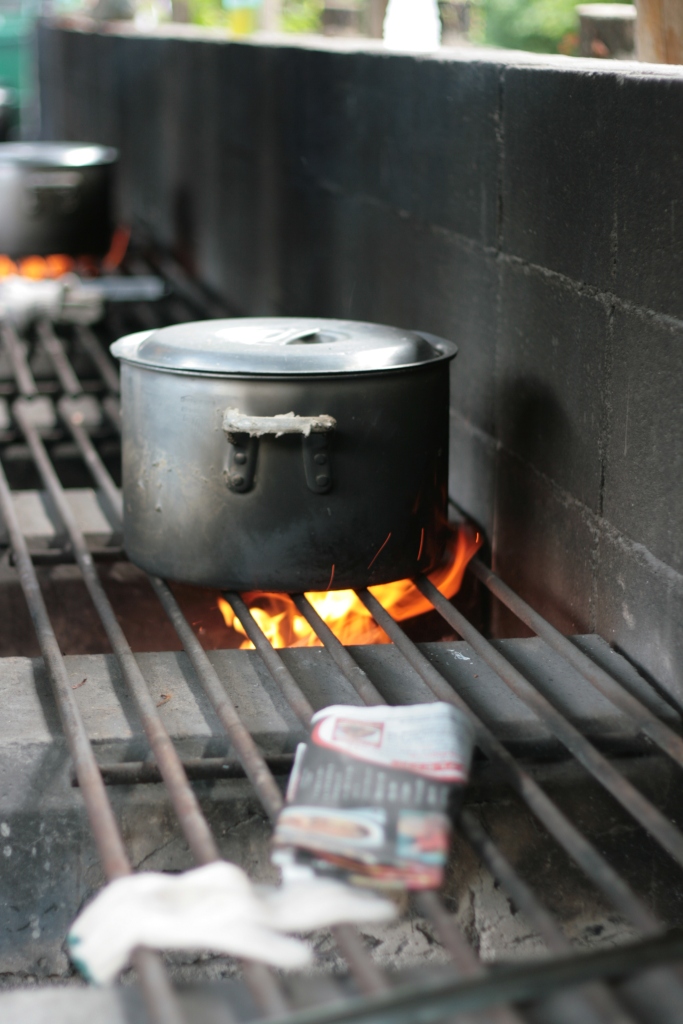 During the lull of cooking, a handful of the kids approached me to inquire about who I was, where I was from, and just to practice their English with me. They quickly learned that I knew how to speak Japanese and very soon-after asked me things in Japanese, as I replied to what they asked in English. From this experience alone, I know I’m going to have a great time teaching these kids as they’re incredibly positive, well-behaved, and excited to learn.

Shortly after lunch the kids headed down to the stream to swim, play, and catch fish. Unlike traditional fishing, these kids were given guidance and proper instruction on how to catch the fish using both hands. I didn’t really think it would be all that easy (which it wasn’t) but one after another the kids caught varying sizes of fish. As the kids caught the fish and enjoyed their time in the river, the other teachers and I, salted, skewered, and cooked the fish for a snack/early dinner for the kids later on. 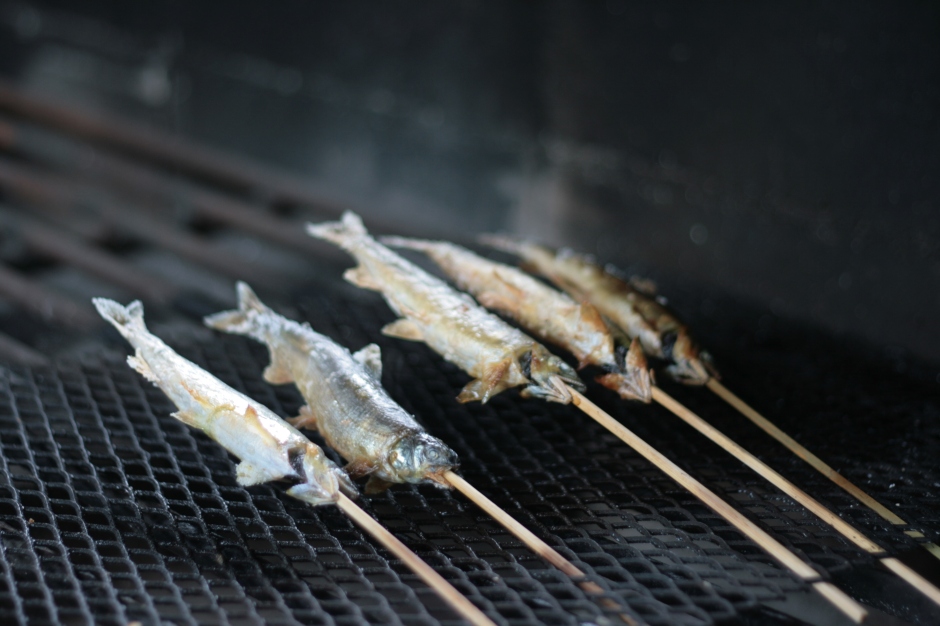 The fish turned out to be quite delicious. You can tell which ones are mine, as I failed to realize that the teachers were skewering the fish in a way that they curved down the stick. I didn’t quite understand the purpose of why they did this, but once you started to eat them, the curved ones were more likely to stay put, as opposed to the straight ones which often slid down or fell off the skewer entirely.

Shortly after we finished cooking the fish, a storm rolled in and it started to rain pretty hard. Thankfully, the teachers came prepared and already had a tent area large enough to house all the kids and staff, comfortably. I don’t know how they do it, but Japanese weather reports are amazingly accurate and are updated frequently enough that you can practically predict the weather yourself if you keep yourself posted. 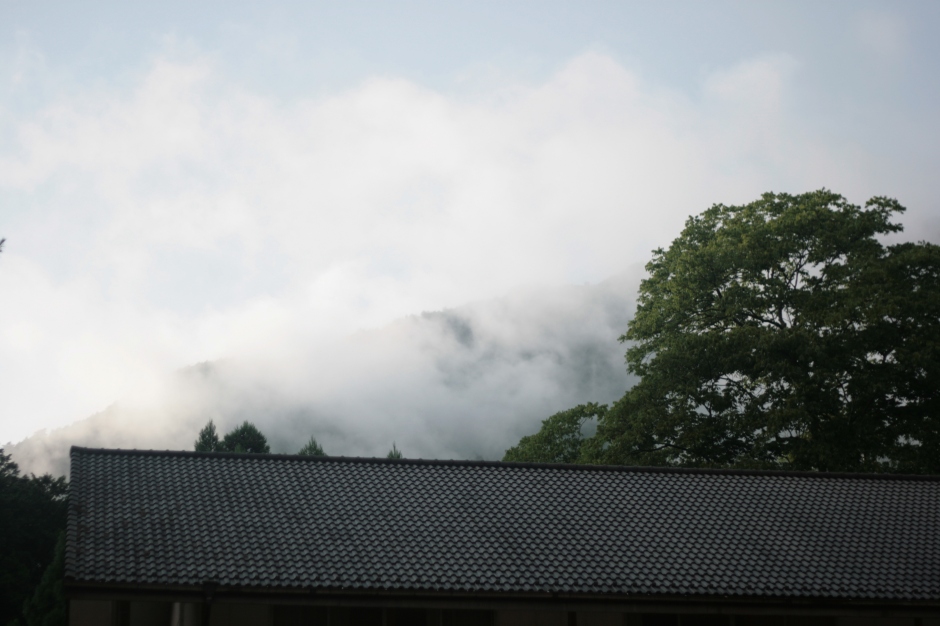 At any rate, after about an hour or so of torrential rain it cleared up enough for the staff to build a large bonfire/campfire nearby, where the camp staff lead the kids in a song and dance to end their day of interaction. Overall, it was a great opportunity for me to meet some of my future students and interact with them on a much less formal level outside of school. I definitely look forward to participating in this inter-village exchange event again, next year!